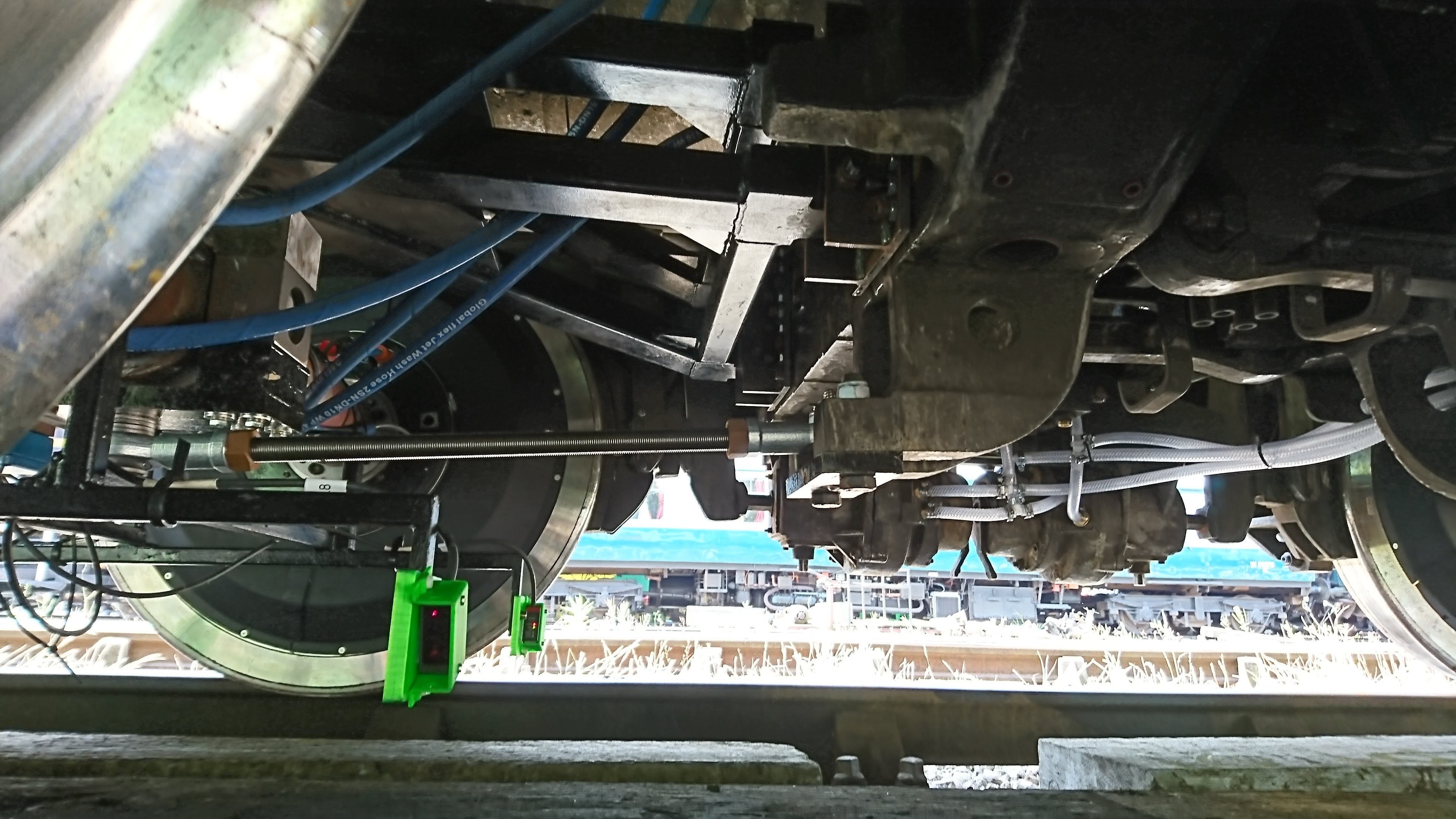 Laser triangulation sensors from Micro-Epsilon are being used to measure the lateral position of rail bogie wheels relative to the rail head in a groundbreaking rail traction technology project by Derby-based company, SET Limited.

ActiWheel is an innovative traction system that uses artificial intelligence to guide trains along the tracks, enabling quicker, smoother and more economical rail travel. The solution could dramatically change the way that rail vehicles run on the railway. As Martin Whitley, Director at SET Limited explains: “This revolutionary wheel motor can be controlled to produce more driving force on one side or the other in order to steer the wheelset down the centreline of the track. For the last 200 years, conventional rail vehicles have only had a solid axle and wheel coning providing this capability which drives some significant compromises and issues. What we want to do is to see this technology implemented as the technology of choice for rail passenger vehicles of the future.”

In the ActiWheel solution, the motor is integrated in the wheel, which means there is no transmission between the two and no moving parts beyond a bearing which every wheel and axle has. In addition, there is no friction braking systems, so there would be a significant reduction in the amount of maintenance required.

Neil Cooney, Technical Director at SET Limited comments: “One of the biggest issues facing the rail infrastructure is Rolling Contact Fatigue [RCF], which occurs due to the energy in the contact between the wheel and the rail. Conditions under the contact patch are always severe and the yield stress of the rail wheel is always exceeded, on at least a microscale.”

“Actively yawing the wheels along with active torque control, manages the contact patch at the optimum point of the rail, practically eliminating RCF. This is because ideal [close to radial] steering reduces the energy in the contact patch to a point where RCF does not occur and wear is very small.”

The ActiWheel is a very high reliability, very durable system and Cooney expects his wheels to last somewhere between four to 10 times longer than a conventional set up. There is virtually no wear, which means the rail isn’t being damaged and the wheels don’t deteriorate. The solution is also lightweight, which means it’s a lot easier to accelerate and decelerate the train and there is additional carrying capacity for passengers.

For the last nine months, ActiWheel has been put through its paces in a technical demonstrator project. An ex-London Underground train with a single carriage was fitted with an ActiWheel system on each of its eight wheels. The project was a success, says Cooney, with the results proving that wear and RCF were almost negligible. The project has already received some significant industry interest and SET Ltd is engaged in developing a system to a network rail. For this project, each ActiWheel system incorporates an optoNCDT 1420 laser triangulation sensor. “A critical part of the ActiWheel system is to understand the lateral position of the wheel relative to the rail. Then we can control the wheel and avoid the flange making contact with the rail head,” explains Cooney. “We’re really using the sensors to confirm that our complex controllers are actually working correctly.”

The optoNCDT 1420 laser triangulation sensor with integral controller is designed for high precision, high speed, dynamic displacement, distance and position measurement applications. The measuring rate is adjustable up to 4kHz. A range of different output signals enable easy integration of the sensor into plant or machine control systems. As well as analogue voltage and current outputs, a digital RS422 interface provides distance information from the sensor. All optoNCDT 1420 sensors operate using a web interface for fast sensor set up and configuration. Additional features of the optoNCDT 1420 include video signal display, signal peak selection and freely adjustable signal averaging, which enables optimisation of the measurement task. A region of interest (ROI) function allows background signal noise to be filtered out.

SET engineers built a special frame that lies beneath the wheel axle on the train. The optoNCDT 1420 sensors are mounted at a distance of 400mm from the rail head, just in front of the flange radius, pointing directly at the rail head. Measurement data from the sensors is output to the ActiWheel control system via 4-20mA.

Robust and reliable in harsh conditions

“We initially approached Micro-Epsilon for a suitable sensor and were very impressed with the application engineer who demonstrated the optoNCDT 1420 sensor to us. The sensor met all our technical requirements in terms of its flexibility, resolution and robustness. We are measuring down to 0.1mm accuracy and lateral movement can be up to a maximum of 20mm,” states Cooney.

“The sensors have performed very well in the demonstrator project and on other projects where we’ve tested the ActiWheel system. They are reliable even in the harsh environment underneath a train, where dust, dirt and moisture are present. They operate reliably whether it’s a cold, wet, rainy day or a bright sunny day. In the demonstrator project, we didn’t even have to clean the sensors after a couple of thousand miles of testing.”

“If we need to use the sensors for other applications, we can calibrate them ourselves and optimise their performance accordingly. We’ve also been impressed by the filtering function, which filters out noise from dirt, dust, grease and pieces of bent metal on the rail head, which means we can trust the measurement data.”

For more information on the optoNCDT 1420 laser triangulation sensors, please call the Micro-Epsilon sales department on +44 151 355 6070 or email info@micro-epsilon.co.uk