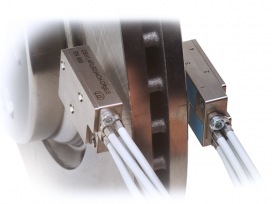 The CS1 capacitive sensors determine the thickness of the brake disc from both sides using the Differential Principle. While the brake disc rotates, thickness deviation is calculated over the complete circumference of the disc. Using several capacitive sensors in pairs (or the CHS1-4FL multi-channel sensor from Micro-Epsilon), multi-track thickness measurements can be performed without having to use an additional encoder.

Combined with the controller, both sensor channels can be processed synchronously. Data is output via an Ethernet interface. The controller is activated by the Disc Thickness Variation Measurement software supplied as standard by Micro-Epsilon. Data can be evaluated using a PC or notebook.

Multi-track sensing
The innovative, CSH1, 4FL multi-track sensor is also available from Micro-Epsilon. This system contains four capacitive sensors in a single compact housing, which enables up to four tracks on the brake disc to be measured synchronously. Due to the high bandwidth, dynamic measurements up to 5kHz (-3dB) are possible. Data output is via analogue or digital Ethernet/EtherCAT interface. An intuitive web interface enables fast, easy set up and configuration of the sensor and controller.

For more information on the capaNCDT DTV series, please call the Micro-Epsilon sales department on 0151 355 6070 or email info@micro-epsilon.co.uk