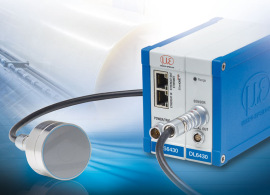 The new combiSENSOR from Micro-Epsilon combines two non-contact displacement measuring principles: eddy current and capacitive, which together enable high precision one-sided thickness measurements of electrically non-conductive materials. The sensor is ideally suited to applications in the plastics industry to determine the thickness of plastic film, plastic coatings on metals, as well as applied adhesives on felt or tapes.

Connected to the sensor via a cable, the combiSENSOR controller processes and calculates the signals in order to output these via digital interfaces. Calculation of the two sensor signals compensates for any mechanical changes to the target object/material, such as thermal expansion, deflections or eccentricity. Due to the redundancy of this combined sensor measuring principle, the measured thickness value remains unaffected by any changes in the measurement set up. Due to the high temperature stability of the combiSENSOR, the system provides high measurement accuracy even in fluctuating temperatures. 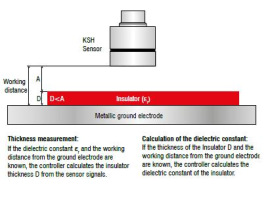 At the same time, the eddy current displacement sensor measures the distance to the ground electrode (e.g. metal sheet or metal roller positioned behind the film). The controller outputs both signals as well as the difference between the capacitive sensor and eddy current sensor. Also, the dielectric constant can be calculated with known thickness and working distance.

An intuitive web interface simplifies set up and configuration of the sensor. The controller also features digital Ethernet and EtherCAT interfaces for easy integration into the user’s own production control environment.