Precision sensor manufacturer Micro-Epsilon has launched the wireSENSOR MT series of miniature draw-wire sensors (cable transducers) for displacement, movement and position measurements. The sensors stand out due to their ultra-compact design relative to their measuring ranges (from 40mm up to 130mm).

Three miniature MT versions are available, which can be integrated into extremely tight spaces. The sensors are protected by a robust aluminium housing, enabling their use in a wide range of industrial applications. Two through-holes in the housing, as well as an integrated ring eyelet at the end of the cable, allow fast, easy mounting of the sensor.

Weighing just 8g and with dimensions of 19x19mm, the wireSENSOR MT19 is the most compact version and is currently the smallest draw wire sensor in the world. With a measuring range of 40mm and a possible cable acceleration of up to 60g, the MT19 is particularly suitable for applications that require high dynamics such as crash test dummies, simulators and other impact test rigs. 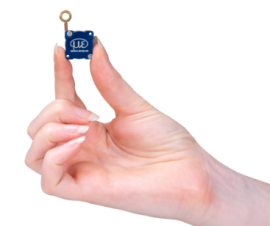 Chris Jones, Managing Director of Micro-Epsilon UK comments: “In addition to its ultra-compact design relative to its measuring range, the wireSENSOR MT series also stands out due to its suitability for measurement tasks where fast wire movements are required. We’ve also made the design of the sensors extremely robust, allowing their use in a wide variety of industrial environments and dynamic test bench applications.”

Depending on the industry and application, draw wire position sensors are commonly referred to as cable transducers, cable-extension transducers, string potentiometers, yo yo pots, linear position string pots, and string encoders. Using a draw-wire sensor, a linear movement is transformed into a rotary movement. The free end of the wire is fixed to the moving object. An encoder or potentiometer translates the rotary movement created by the extension of the wire into an electronic signal. The sensor works like a tape measure, except with a draw-wire sensor the user does not have to read off the measurement of the extended tape. The rotation of the drum on which the steel wire is wound is measured automatically and the measurement signal is output in either analogue or digital formats.

For more information on the wireSENSOR MT series, please call the Micro-Epsilon sales department on 0151 355 6070 or email info@micro-epsilon.co.uk