Non-contact capacitive displacement sensors from Micro-Epsilon are being used to measure the thermal expansion of star sensor carriers under extreme conditions.

The star sensor measuring platform was developed by German company KRP Mechatec in cooperation with Micro-Epsilon. Star sensors are optical measuring instruments based on CCD elements or other optical sensors. Critically important for space travel, star sensors determine the altitude and position control of satellites. They must therefore provide micrometre-accurate measurement results in order to ensure exact position determination in space. Therefore, the supports on which star sensors are mounted must not be subjected to any thermal deformation. The behaviour of the material used is therefore tested using high precision capacitive displacement sensors from Micro-Epsilon. 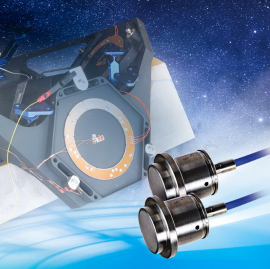 The carriers have a similar shape to a large “M”. One star sensor is mounted on the left, one on the right and another in the centre. These sensors are tilted to the left or right. The sensor in the middle points vertically upwards. During the verification test, five capacitive sensors on each support, in the X-, Y- and Z-axes, detect a possible rotation of the platforms in the μrad range (1μrad corresponds to a displacement of 1μm at 1m lever arm). Tests of the measuring platform showed a stability of the rotation measurement at the reference surfaces of <0.1μrad/K.

Capacitive sensors from Micro-Epsilon operate on a non-contact, wear-free basis, achieving excellent results in terms of linearity, reproducibility and resolution. Contrary to what many engineers may think, non-contact capacitive displacement sensors are not only suitable for use in clean environments such as laboratories, cryogenics, clean rooms and operating theatres. The latest sensors are designed to operate in dirty, dusty industrial environments too. While sub-micrometre precision is reached in typical industrial environments, high precision sub-nanometre measurements are possible in clean environments, where dirt, dust, oil or moisture are not present. The capaNCDT series from Micro-Epsilon is also suitable for the detection of fast moving objects and dynamic high speed processes, enabling fast, reliable measurements of motion sequences. Capacitive sensors are also suitable for use in vacuums and ultra high vacuum applications.

Capacitive sensors from Micro-Epsilon also provide long-term stability, as there are no integrated components that could reduce the service life. Another advantage is the variety of sensor combinations available. Each capacitive sensor can be operated with any Micro-Epsilon controller without requiring any complex calibration. For special tasks, capacitive sensors and measurement systems can be modified according to a customer’s specific individual requirements. Changes requested include, for example, modified designs, target calibration, mounting options, individual cable lengths, modified measuring ranges or sensors with integrated controller.