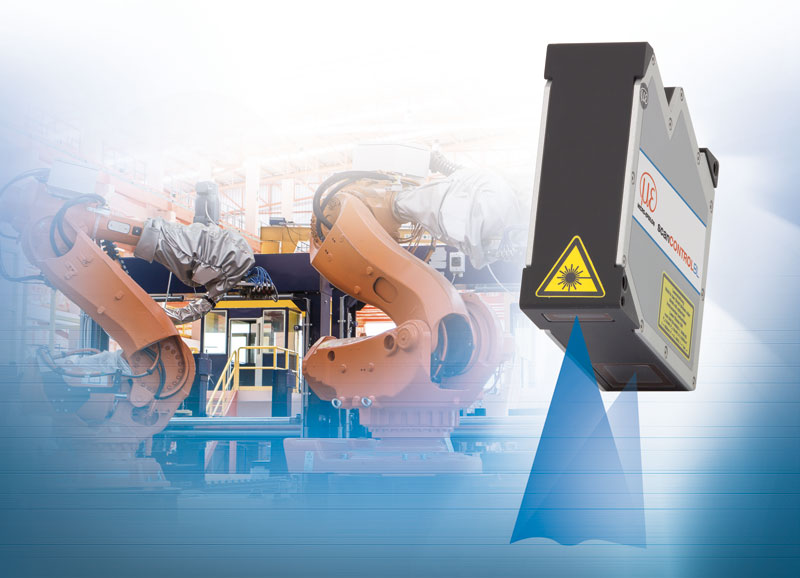 A 2D laser profile sensor from Micro-Epsilon is being used by the Nuclear Advanced Manufacturing and Research Centre (Nuclear AMRC) in a project to develop a smart robotic grinding/deburring solution for welded components. The sensor is mounted to a robot end effector and measures the profile of welded joints and planar surfaces.

Coroma is a robotic system development and integration project to automate a variety of manufacturing tasks. Most of these tasks are secondary finishing operations (e.g. grinding, sanding, deburring, etc.) which are typically carried out manually on welded components such as nuclear fuel racks and tube structures.

As Ozan Gurdal, research engineer at Nuclear AMRC states: “Manual finishing can take tens of hours of cycle time, as well as being a health and safety issue. The idea of the Coroma Project was to use robots to automate these processes with sensor and software assistance and to demonstrate the work on full-scale demonstrators provided by the use case owner companies.” 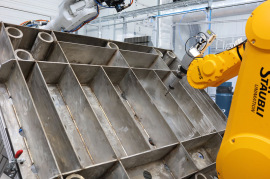 Nuclear AMRC’s involvement in the project was to develop a smart robotic grinding/deburring solution for welded components. The use case owner was Equipos Nucleares SA, a nuclear fabricator from Spain. As Ozan Gurdal says: “We developed an integrated end-effector for the robot with a Micro-Epsilon 2910-100 BL laser profile sensor on one end and a pneumatic spindle on the other – to eliminate the need to use a tool changing system, which would stand out as an expensive item.”

“It is not possible to use the part’s design CAD model when it comes to programming robots for weld grinding or conditioning as there is a significant [sufficient to affect robot paths] difference between the design and actual [as-welded] part because distortion and/or warpage is inevitable after welding and so exact weld sizes are unknown. Therefore, the 3D CAD model of the as-welded part is required to program paths accurately,” explains Ozan Gurdal.

The scanCONTROL 2910-100_BL laser sensor held by the end effector is used to scan the areas of interest in the part, which are welded joints and planar surfaces used for reference. The sensor provides the axial and lateral distance (2D) measurements between the scanned object and sensor frame, which is not sufficient for reconstruction. Therefore, the 2D data obtained from the laser sensor is combined with the position of the robot flange, which is read in real-time from the robot controller using a LabVIEW-based central controller. Combining these two, the central controller generates the 3D reconstruction of the as-welded part as a point-cloud and converts it into the desired CAD format.

“The 3D CAD model of the as-welded part is then used to generate grinding/deburring paths either offline [using CAM or robot path programming software] or online using in-house developed path generation algorithms. Once path generation has been completed, the grinding or deburring operation begins,” states Ozan Gurdal. The robot used for this work was a 6-axis Staubli TX200, as Staubli was one of the partners on the project. 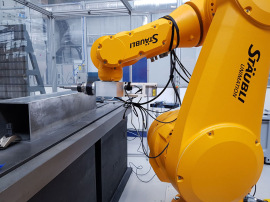 The scanCONTROL 2910-100_BL is a compact, high performance laser profile sensor (laser line scanner) with integrated electronics that makes it ideally suited to robot mounting. It operates using blue (violet) laser technology rather than red, especially useful for measuring against shiny metallic structures or difficult-to-measure surfaces. The sensor projects a wide laser line from 58mm to 143mm over the object with a profile resolution of 1280 measuring points. The measuring range in the z-axis is from 100mm to 290mm, which gives useful flexibility for the robot positioning.

Easy integration and connection to PCs & PLCs
The sensor is equipped with a Gigabit Ethernet interface for transferring profile data, as well as a multi-purpose connector for RS422, encoder input triggering, Digital In (HTL/TTL), power supply and synchronisation. The sensors support Power-over-Ethernet (PoE), which means they can be operated with only one cable, thus simplifying installation even further. A simple and intuitive configuration interface is provided with all sensors to allow sensor configuration, as well as full .SDK for more detailed machine integration. The sensors are configured with a unique IP address (user changeable), which enables future remote configuration and diagnostics. A Modbus protocol (supported via Ethernet and the RS422 interface) also enables direct connection between the sensor and a PLC.

“The scanCONTROL laser sensor is a good piece of kit. We’ve successfully used the sensor in multiple projects, for example, weld monitoring and weld grinding. The integration was straightforward too. There are a variety of APIs/software tools provided by Micro-Epsilon for integration with different software platforms and programming languages such as LabVIEW and C++, so it was really a plug-and-play set up without much hassle which saved precious time for us. We’ve also been very happy with the technical support provided by Micro-Epsilon when we’ve needed this,” concludes Ozan Gurdal.

For more information on the scanCONTROL series of laser profile sensors, please call the Micro-Epsilon sales department on 0151 355 6070 or email info@micro-epsilon.co.uk