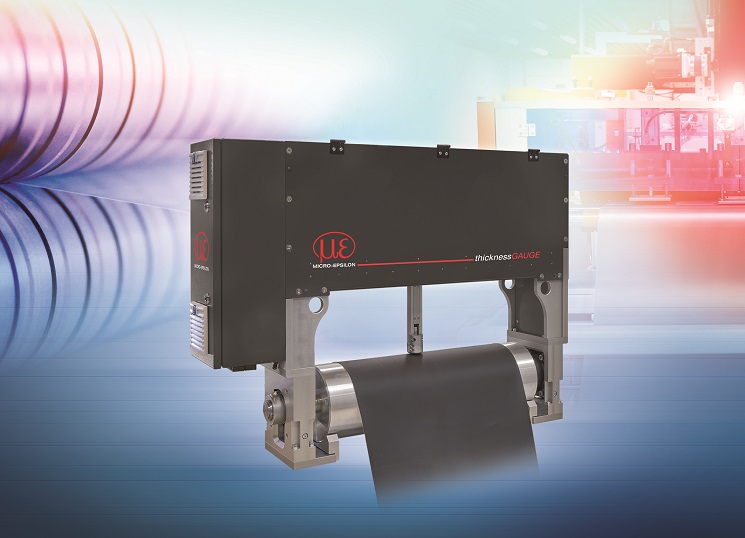 thicknessGAUGE O.EC is a complete, compact, inline thickness measurement system for plastic film, strip, coatings and sheet materials up to 3mm thick and for web widths up to 1,250mm

Precision sensor supplier Micro-Epsilon has extended its thicknessGAUGE range of inline thickness measurement systems with an O-frame version for precise thickness measurements of plastic strip, coatings, film and sheet materials, up to 3mm thick and for web widths up to a maximum of 1,250mm. The complete ‘out-of-the-box’ solution for thickness gauging and quality control comprises a compact, sturdy base frame, an integrated control cabinet and an aluminium measuring roller.

The fully assembled thicknessGAUGE O.EC system uses a combiSENSOR KSS6430 for thickness measurement, which enables sub-micron accuracy and high signal stability. The combiSENSOR combines a capacitive sensor with an inductive sensor based on eddy current technology. Both sensors measure from the same side in the direction of the aluminium roller. The capacitive sensor uses the dielectric constant of the non-conductive material to determine the distance to the topside of the target object, while the integrated eddy current sensor records the distance to the aluminium roller. The difference between the two signals provides the thickness of the material. Before measurement, calibration must be performed on a reference target of known thickness.

Depending on the application requirements the system can be operated in traversing mode, scanning back and forth continuously, or in fixed track mode where a specific point, often the centreline, is taken for gauge control. The system can also be set to edge mode for control of the material edge thickness. The entire system is powered via a 24V power source, which makes the installation and integration work as simple as possible. 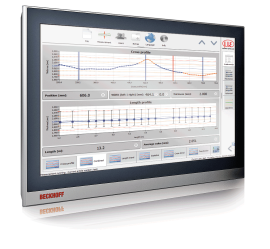 All thicknessGAUGE systems are supplied with a multi-touch panel industrial PC that is pre-installed with the thicknessCONTROL software package from Micro-Epsilon. This is the same software used in the high end measurement systems and provides convenient touch gesture control similar to that of modern smart phones. The measured process values can be displayed in multiple ways, including simple large values of thickness, cross profiles and length trends or combinations of each. The different measurement modes such as fixed track thickness measurement at any position, traversing measurement of the thickness cross profile, and 3 or 5 track measurement of longitudinal thickness trends can be selected. Full SPC data of the measurements is available and an automated verification of the system’s capability can be completed by the customer themselves.

Other features for documentation and process control include an article database, production archive, statistical evaluations, as well as limit value monitoring with ‘return back to production’ using (optional) digital fieldbus interfaces.

Glenn Wedgbrow, Business Development Manager at Micro-Epsilon comments: “Our thicknessGAUGE range now includes both C-frame and O-frame configurations, with a variety of sensor technologies available to suit the exact requirements of the application. The O-frame design enables customers to measure increased web widths, up to three times wider than our C-frame version. All thicknessGAUGE systems are suitable for OEM series integration [plant manufacturers] but can also be retrofitted by the end customer to existing plants.”

For more information on the thicknessGAUGE O.EC measurement system, please call the Micro-Epsilon sales department on +44 (0)151 355 6070 or email info@micro-epsilon.co.uk