3D measurement data from a single source: the complete 3D sensor portfolio for every industrial application 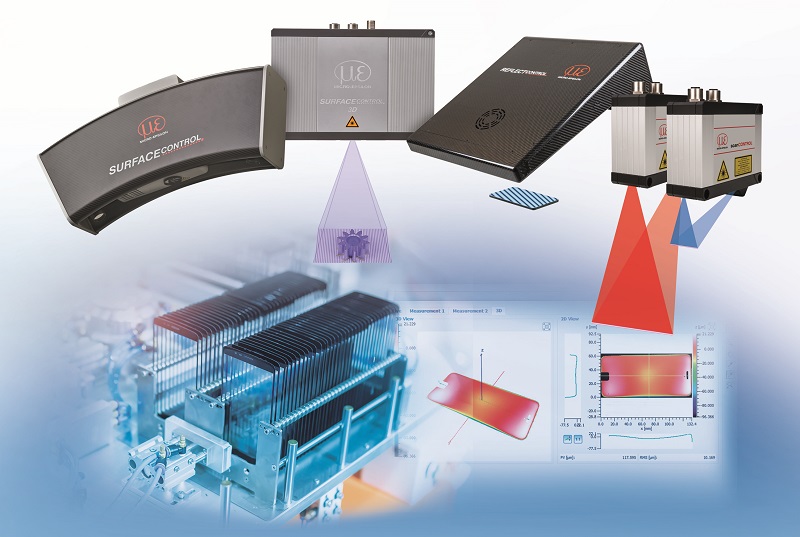 To achieve highly accurate 3D measurements, a perfect match between hardware and software is required. Micro-Epsilon has developed a new generation of 3D sensors that not only uses high performance hardware, but also has perfectly matched software, 3D Inspect, to accompany it. This means all 3D sensors from Micro-Epsilon can now be operated using the same 3D data capture and evaluation software. Furthermore, as the sensors and software come from a single source, only one contact person is needed to help users solve complex measurement tasks.

There are four sensor types available in the Micro-Epsilon 3D sensor portfolio:

The surfaceCONTROL 3D 3000 series is a new generation of 3D snapshot sensors from Micro-Epsilon that work according to the principle of optical triangulation based on fringe projection. Using a matrix projector, a sequence of patterns is projected onto the test object surface. The light of the patterns diffusely reflected by the test object surface is recorded by two cameras. The three-dimensional surface of the test object is then calculated from the recorded image sequence and the knowledge of the arrangement of the two cameras to each other.

The surfaceCONTROL 3D 2500 series has been redeveloped to the newest platform and is a 3D sensor for inspection of larger targets. Measuring fields are up to 650 x 495 mm, with high measuring range depth from 150 mm to 300 mm. Data capture time is around 0.5 seconds and repetitive precision is up to 3 µm.

The reflectCONTROL series is for 2D and 3D measurements on flat, mirror-like surfaces. It consists of a large screen that projects light patterns onto the surface which is evaluated by two cameras in the housing and a 3D point cloud generated. The sensor sends this 3D point cloud directly via GigE Vision standard to the software.

The reflectCONTROL series has two models: one for 2D measurement and the other for 3D measurement.

The 2D measurement model is for surface inspection and has a measurement field of 110 mm x 245 mm and outputs 2D images for the intensity, amplitude and curvature of the captured surface.

The 3D model is for 3D measurement of the target looking at flatness and waviness. It has a measuring field of 80 x 160 mm and also outputs the 2D data but in addition provides the 3D point cloud. The sensors offer highest repeatability of ± 1.0 µm in a peak-to-valley, so that even the smallest deviations in the 10 nm range can be detected. The reflectCONTROL also supports the new GigE Vision / GenICam standards for easy integration into existing 3D image processing tools.

The scanCONTROL series from Micro-Epsilon is a 2D laser line sensor that can build up 3D data from the captured 2D profiles. The sensor uses the triangulation principle and projects a wide laser line onto the target surface, which is viewed by the CMOS receiver array and converted into a 2D profile line of x and z coordinates. The 3D information is built up from a sequence of captured profiles which makes it especially useful for capturing data from targets that are continually moving and not able to stop.

The scanCONTROL 3000 series are compatible with 3D measurement and inspection and are offered with a number of different measuring ranges which govern the line width of the sensors.

Which sensor for which surface?

surfaceCONTROL and scanCONTROL work best on matt or diffusely reflecting surfaces, i.e. those that do not present a perfect mirror. For particularly shiny and flat surfaces, the reflectCONTROL is ideal.

For control of the 3D measurement, two integration methods are suitable depending on the customer’s configuration in their setup. The sensors can be triggered directly to start acquisition from a line PLC or via the host PC running the analysis software.

When processing large amounts of 3D data, it is important to consider how this data and the resulting measurement information is transferred to the control system. Micro-Epsilon 3D sensors communicate using the standard GenICam and GigE Vision protocols. Once the data is processed in the PC, it must then be transferred to the control system, which today, is often achieved using an Industrial Network such as Profinet, Ethernet I/P or EtherCAT. Micro-Epsilon offers the Industrial Performance Unit (IPU), an industrial PC (IPC) configured specifically to run its sensors and software, as well as incorporating the necessary gateway architecture to communicate with Industrial Networks.